The housefly is the most common fly species found in houses. Adults are gray to black, with four dark, longitudinal lines on the thorax, slightly hairy bodies, and a single pair of membranous wings. They have red eyes, set farther apart in the slightly larger female.

They are distinguished by the serrated inner edge of their mandibles, and their functional compound eyes which are present in all castes.

They forage for grass at night and during daylight hours, and pigmented workers are often observed outside the nest. 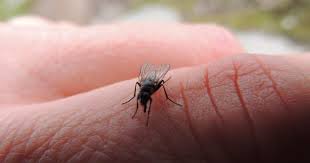 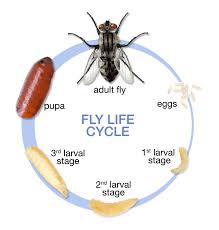 The female housefly usually mates only once. She lays batches of about 100 eggs on decaying organic matter such as food waste, carrion, or feces.

These soon hatch into legless white larvae, known as maggots. After two to five days of development, these metamorphose into reddish-brown pupae, about 8 millimeters (3⁄8 inch) long.

Adult flies normally live for two to four weeks but can hibernate during the winter. The adults feed on a variety of liquid or semi-liquid substances, as well as solid materials which have been softened by their saliva.

They can carry pathogens on their bodies and in their feces, contaminate food, and contribute to the transfer of food-borne illnesses, while, in numbers, they can be physically annoying.

For these reasons, they are considered pests.

Each female housefly can lay up to 500 eggs in her lifetime, in several batches of about 75 to 150.

The eggs are white and are about 1.2 mm (1⁄16 in) in length and they are deposited by the fly in a suitable place, usually dead and decaying organic matter, such as food waste, carrion, or feces.

Larval development takes from two weeks, under optimal conditions, to 30 days or more in cooler conditions. 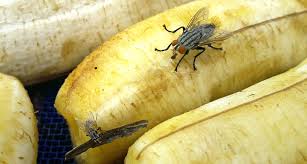 At the end of their third instar, the larvae crawl to a dry, cool place and transform into pupae. The pupal case is cylindrical with rounded ends, about 1.2 mm (1⁄16 in) long, and formed from the last shed larval skin.

When metamorphosis is complete, the adult housefly emerges from the pupa. To do this, it uses the ptilinum, an eversible pouch on its head, to tear open the end of the pupal case. The adult housefly lives from two weeks to one month in the wild, or longer in benign laboratory conditions.

Having emerged from the pupa, it ceases to grow; a small fly is not necessarily a young fly but is instead the result of getting insufficient food during the larval stage.

Male houseflies are sexually mature after 16 hours and females after 24.

The larvae depend on warmth and sufficient moisture to develop; generally, the warmer the temperature, the faster they grow.

The life cycle can be completed in seven to 10 days under optimal conditions but may take up to two months in adverse circumstances. In temperate regions, 12 generations may occur per year, and in the tropics and subtropics, more than 20. 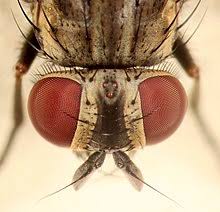 Adult houseflies are diurnal and rest at night. If inside a building after dark, they tend to congregate on ceilings, beams, and overhead wires, while out of doors, they crawl into foliage or long grass, or rest in shrubs and trees or on wires.

In cooler climates, some houseflies hibernate in winter, choosing to do so in cracks and crevices, gaps in woodwork, and the folds of curtains. They arouse in the spring when the weather warms up, and search out a place to lay their eggs.

Houseflies are a nuisance, disturbing people while at leisure and at work, but they are disliked principally because of their habits of contaminating foodstuffs.

They alternate between breeding and feeding in dirty places with feeding on human foods, during which process they soften the food with saliva and deposit their feces, creating a health hazard.

Houseflies serve as mechanical vectors to over 100 pathogens, such as those causing typhoid, cholera, salmonellosis, bacillary dysentery, tuberculosis, anthrax, ophthalmia, and pyogenic cocci, making them especially problematic in hospitals and during outbreaks of certain diseases. Disease-causing organisms on the outer surface of the housefly may survive for a few hours, but those in the crop or gut can be viable for several days.

Houseflies can be controlled, at least to some extent, by physical, chemical, or biological means. Physical controls include screening with small mesh or the use of vertical strips of plastic or strings of beads in doorways to prevent the entry of houseflies into buildings.

Fans to create air movement or air barriers in doorways can deter houseflies from entering, and food premises often use fly-killing devices; sticky flypapers hanging from the ceiling are effective, but electric “bug zappers” should not be used directly above food-handling areas because of scattering of contaminated insect parts.

Another approach is the elimination as far as possible of potential breeding sites. Keeping garbage in lidded containers and collecting it regularly and frequently, prevents any eggs laid from developing into adults. Unhygienic rubbish tips are a prime housefly-breeding site, but if garbage is covered by a layer of soil, preferably daily, this can be avoided. 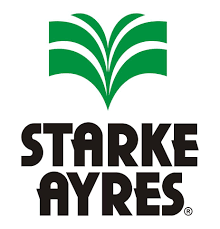